Use grids to organize the content on your page, and to make your layout adjust responsively to smaller screens and devices.

The grid element is a foundational layout element which allows you to organize, align, and position elements within columns on the page.

Grids can contain up to 12 columns, separated by gutters. The column and gutter widths are customizable. Important note: our grids work best for 2, 3, 4, 5, 6, and 12 column grids.

Grids are particularly useful for optimizing designs across different devices: by changing grids from a side-by-side layout to a stack at narrower screen widths, you can easily make your website responsive.

Scroll to the bottom for a video tutorial.

Adding a grid to the page

Select the the grid element icon from your left toolbar, and drag-and-drop it onto the page: The grid may be placed as a root element on the page, or placed within another grid or container.

By default, the grid will appear with three columns, and take up 100% of the width of the page (or parent container):

The narrow areas in between the three columns are the gutters. These represent empty space between each column.

Adding Columns to a Grid 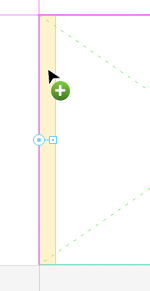 Click this bar, and a new column will automatically be added to the grid: 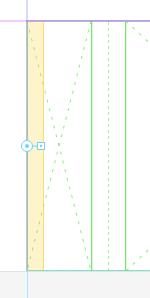 The width of any column in the grid can be adjusted by dragging the gutter. When you hover over a gutter, you'll see the cursor change to a "resize" arrow. Drag to the left or right to make the column wider or narrower: 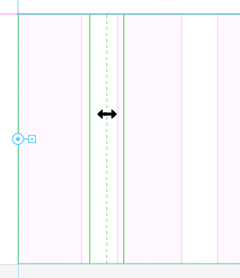 Once you start dragging, pink areas will appear that indicate the layout of the grid element. The column gutter will "snap" to one of these slots in the grid when you resize it.

Note: if you need even smaller columns, try dropping a grid element inside of another grid element.

To adjust the width of the gutters in the grid element, you can use the slider in the top toolbar:

The same slider is also available in the Dimensions Panel in the right toolbar.

Adjusting the gutter width will apply to all gutters in the grid element.

Deleting Columns from a Grid

To delete a column, drag the column gutter all the way to the far left or right edge of the grid element, or drag and drop it next to another gutter.

Changing Grids to Stack or Split Layout for Mobile Devices

The primary use for this is to have your page layout adapt responsively to narrower screen widths.

To have the grid switch to a different layout mode on a mobile device, first select the device mode from the dropdown in the top toolbar.

Then, select a grid layout option from the top toolbar, or from the dimensions panel in the right toolbar.

This will split the columns of the grid. The columns will split into multiple vertical stacks, based on the number of non-stacked columns remaining.

If neither option is selected, the grid will retain its default layout and display all columns in a horizontal row.